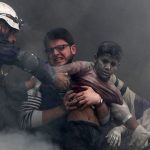 People live in community and each individual has different characteristics. That is, each person’s personality, feelings and aims are different from another person. Sometimes, these differences lead to polarizations, and people in a country fall into dispute in various political or religious matters. Thus, an armed conflict environment comes out. This situation is called civil war and causes a lot of destruction or loss. The civil war affects almost everything in a country. Three most important of these effects are on children, on adults, and on economy.

The first impact of a civil war is on children. They find themselves in the middle of the war without knowing anything. They cannot understand why people kill each other. Children just want to play and live in peace with their parents but civil wars affect their physical, psychological, and emotional development negatively. Most children are either killed or become disabled. Also, many of them lose their families and they have to live by themselves. On the other hand, most of these children leave their homes and their schools behind and have to immigrate to another country. They try to set up a new life in there but they never forget what happened to them in their own country.

The second effect is on adults. Actually, civil wars are unbearable for adults too. They see that the people they share the same boundaries are their enemies. While most of them are dead, some of them live worse than the dead. If other countries accept them, they try to live in there by leaving their homes, works, and so on. Civil wars have different effects on men and women. On one side, men feel helpless because they cannot protect their women and children, so they regard themselves as parasites. On the other side, women are raped. They are also exposed to psychological violence. In short, the war shows the bad face to both genders.

Finally, as for economic effects, a civil war does great harm to historical monuments, touristic resorts, farming areas, industry and trade zones that revitalize a country’s economy. Therefore, lack of economic activities causes the country at war to face economic recession. The country loses the value of its national currency and inflation starts. Nobody can invest, so poverty occurs and its public suffer from food shortage.

In summary, a civil war does not have any benefits to anyone. It causes innocent people to die and makes a city disappear. I belive that people should not ruin any other person’s life, dreams and the future. The solution is that we should give priority to exchange our ideas instead of using weapons when we have disagreements.